Hello and welcome to my prediction for the Eredivisie September Player of the Month! Although most people care more about the Top 5 leagues the Eredivisie can bring some really good cards too when it comes to POTM. You might missed it but last months winner was Xavi Simons and I even expect a better one for September, especially with the amount of goals we've seen in a couple of games from the likes of PSV or Ajax. So let's move on and check out who is a potential nominees! 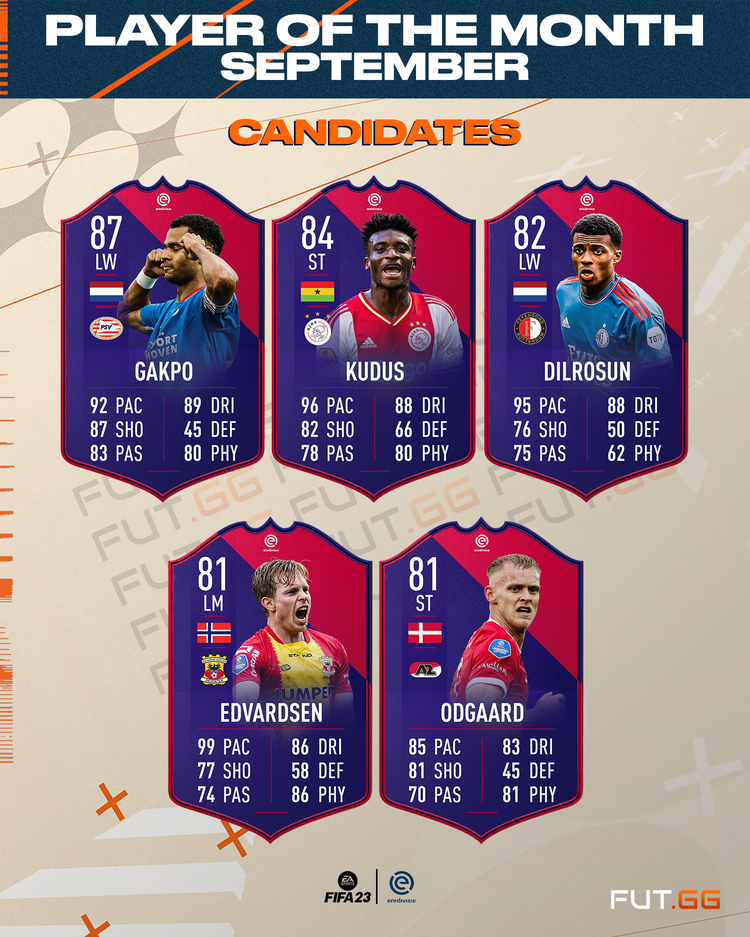 The title race is always a tough one between PSV and Ajax and so it is this season with both sitting top of the table level on points. Eindhoven had a pretty successful month apart from their unlucky 1-2 loss against Twente and the most entertaining game was against Feyenoord where they ran out as 4-3 winners. Cody Gakpo, who was rumored to leave PSV in the summer, is playing on a high level this season so far, scoring twice and assisting another three in September. Even though one goal and all assists came from their game against Feyenoord, I do think he should get the nomination for the September award and it would be an insane card after he already got a really good inform!

Next up we're talking about Ajax, one of the most attacking teams in Europe and we saw that in September across all competitions. Ajax is leading the table level on points with PSV and one who already was really good at the end of last season seems to increased his game this season again. Kudus was one of the standout performers for Ajax, scoring 4 goals in these September Eredivisie games and could be one of the nominees.

The next player in my Eredivisie POTM prediction is a bit of a punt and could easily be snubbed. Feyenoord turned into a „goal machine“ the last couple of weeks and most of these games have been successful for them. The game most people remember might be their 3-4 loss against PSV due to Cody Gakpo reveicing the inform from that game but former Hertha Berlin player Dilrosun wasn't that bad either for his side. Two goals and one assist in three games played in September could be enough for a nomination even though he has very few chances in my opinion.

Go Ahead Eagles escaped relegation last season with just two points clear of the relegation zone and the battle continues in the 2022/23 campaign. The Dutch side is currently two points clear of 16th placed Fortuna Sittard thanks to a strong finish in September. The club had a negative streak of five consecutive losses before they went back on winning ways with wins against Volendam and FC Emmen and Edvardsen was once of the main reasons for it. In total the Norwegian midfielder scored three times in three games and could be one of the nominees.

We're finishing with AZ Alkmaar. The Dutch side is the only unbeaten team in the Eredivisie after seven matchdays but sitting third in the standings, one point behind Ajax and PSV Eindhoven. The Danish striker Odgaard was one of two players in the Dutch top-flight who scored four times in September and Odgaard managed to scored in every single game with the most important goal coming from the narrow 2-1 victory against Ajax.