Hello and welcome to our prediction for Team of the Week 2 which will be released on Wednesday this week!

Team of the Week 2 is mostly based on games from international break, there are just a few domestic games from England and Spain which might be considered. There have been a quiet a few surprising results like Iran's victory against Uruguay or Spains loss to Switzerland and international breaks usually often provide more than one inform from one single team and the same could potentially happen once again this week! Also keep in mind that the teams played two games so it could happen that a player will be in because he had one good and one bad game! With TOTW 2 being the "Release Squad" we could expect it to be pretty good but go ahead and check it out! 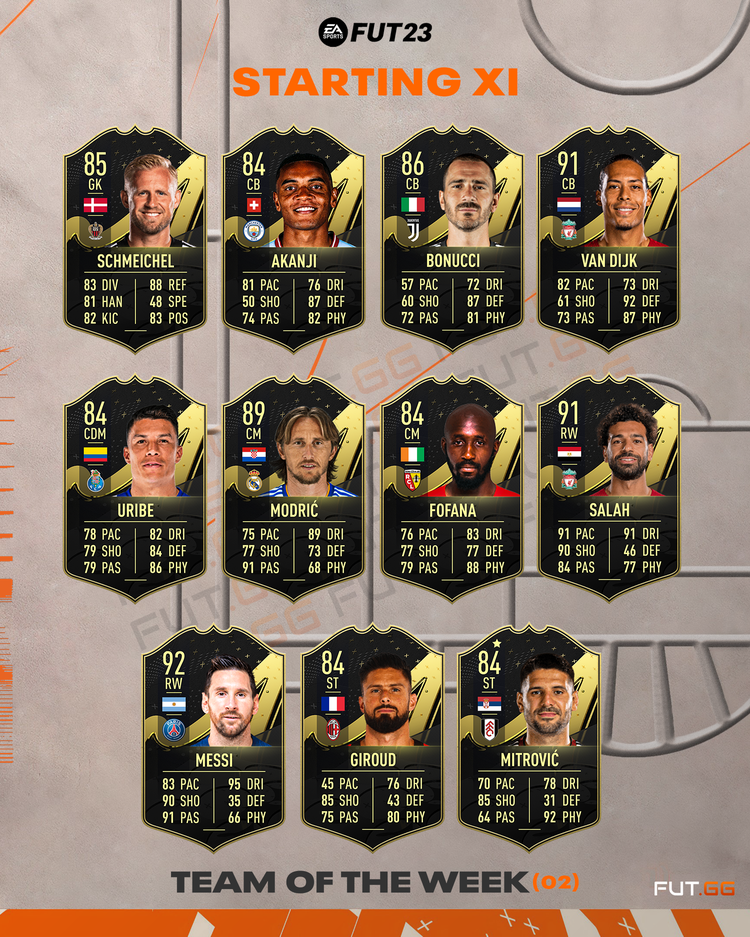 Denmark produced an impressive display to beat France 2-0 on Sunday but missed out on a place in next summer's UEFA Nations League finals, France at the same time produced a lazy and lacklustre performance. Kasper Schmeichel bailed Denmark out after a slow start with a catalogue of important stops, for example the one to deny Griezmann early on in the second half. He finished the game with a total of 7 saves and could be on the line for an inform this week even though there have been a few really good goalkeeper performances.

Spain's hopes of reaching the UEFA Nations League finals in 2022/23 have been dashed after falling to a meek 2-1 defeat to Switzerland in Zaragoza with Luis Enrique's men not been at their best on the night. Manchester City and former Borussia Dortmund defender Akanji was immense for Switzerland. For the visitors to win, they needed their centre backs to deliver big performances, and Akanji did just that. Under constant pressure from Spanish possession, Akanji stayed calm. He headed everything away, but also read the game impeccably and was constantly cleaning up on the ground as well. Beyond a faultless defensive performance, Akanji also scored Switzerland's opening goal by dominating Azpilicueta, and got the crucial flick-on for their winner.

Giacomo Raspadori's goals was enough to see Italy beat England 1-0, confirming the visitors' relegation to group B of the Nations League on Friday night. Leonardo Bonucci was arguably the pick of the players on the pitch. He produced a defensive masterclass and won most of his duels against the England attackers. Furthermore, he produced the all-important assist for Raspadori's goal with his impressive long range passing and was named MOTM by Gazzetta.

The Netherlands completed a double over Belgium as they snatched a hard-fought 1-0 victory over them in the UEFA Nations League on Sunday evening. The Liverpool defender came up with the most important goal as he met Cody Gakpo's corner to send his team to the Nations League finals. The Netherlands' skipper also nullified any threat in the air, won both of his duels, made three clearances and one tackle along the way while playing one key pass and three accurate long balls.

Both Colombia and Guatemala missed out on qualifying for the FIFA World Cup, which will be played in Qatar and now faced each other last weekend in a friendly match in New Jersey. Colombia pretty clear ran away as 4-1 winners and Portos midfielder Uribe was one of the best player that day, assisting twice from the CDM position.

Croatia sealed their place in the UEFA Nations Leagu Finals with a 3-1 win over Austria in Vienna on Sunday evening which also consigns the Austrians to relegation from League A. The visitors needed inspiration from one of their big names, particularly in the absence of Marcelo Brozovic. After Modric put in an insane performance against Denmark in their first fixture he once again stepped up when needed, highlighting his pure quality and finished the game with a goal.

Another central midfielder who was a big fan Favourite last Fifa is Lens' Seko Fofana and he could be on his way for his first inform in Fifa 23 after he scored one goal in Ivory Coast's 2-1 victory against Togo. We have to keep in mind that the game was a friendly but there are not a lot midfielders available this week so we could see him on Wednesday.

International breaks always have a few really good players in it due to the top nations playing against smaller sides and I expect it to happen again this week. Egypt marked the debut of Portuguese coach Rui Vitoria with a 3-0 victory over Niger in a friendly game played in Alexandria on Friday in what was an efficient rather than an enterprising display from the Pharaohs. Liverpool's attacker Salah broke the deadlock two minutes before the break following a fine effort and added a second with a well-taken penalty 12 minutes later to to take his tally to 49 international goals.

The World Cup can't get here soon enough for Argentina and Lionel Messi, who registered their latest sensational performance in a 3-0 win over Honduras in Miami. Argentina's 35-year-old captain Messi put on a show for the fans, playing all 90 minutes and having a hand in all three goals. Messi's eye-seeing pass to 'Papu' Gomez led to the opening goal by Lautaro Martinez before he then scored a penalty and executed a sublime chip over the Honduras goalkeeper for his side's third.

France moved off the foot of their Nations League group after an impressive 2-0 win against Austria in Saint-Denis on Thursday. United defender Varane was the highest rated player on L'Equipe so he could potentially be in but with the importance of other games I instead went with Olivier Giroud who became the oldest scorer in their history and finished the game with a goal and assist to his name.

Set to face Brazil, Cameroon and Switzerland in group G at the upcoming World Cup in Qatar, Serbia dominated a sorry Sweden team that looked short of both organisation and ideas and set up a winner-takes-all clash in their final game against Norway in Oslo on Tuesday. Fulham attacker Mitrovic was unstoppable that night, completing his hat-trick just three minutes after half-time and took his international tally to 49 goals. 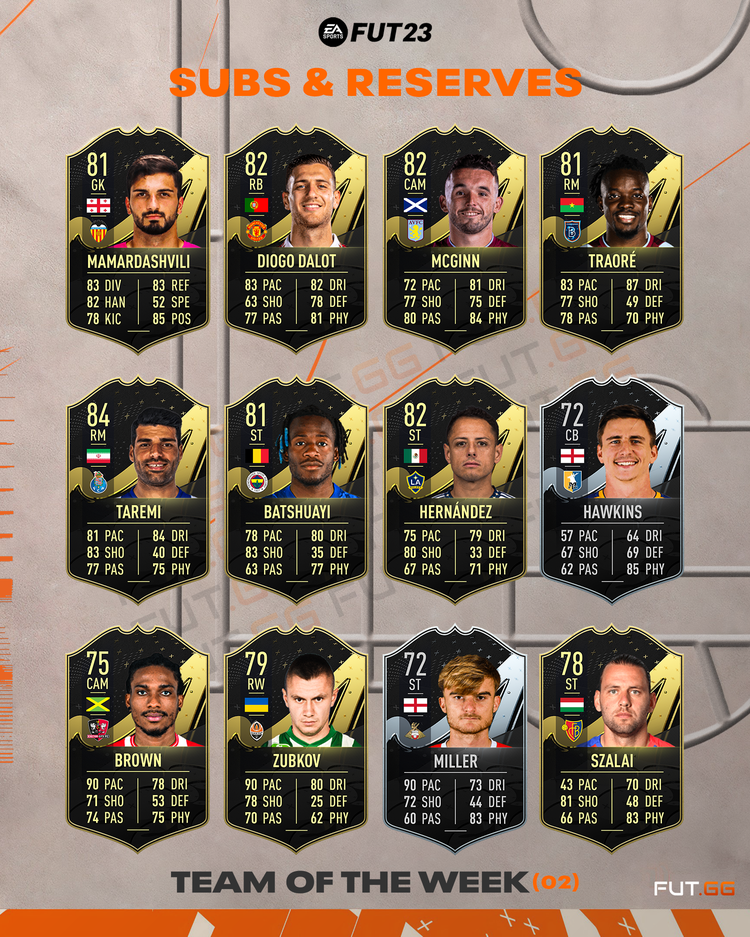 It often happens that international breaks provide very few options for goalkeepers and this continued the past week with Nations League fixtures. One of the couple keepers who really stood out was Georgia's shot-stopper Mamardashvili in their 2-0 victory over North Macedonia in which he made a total of six saves and made sure Georgia kept the three points.

Former champions Portugal put in a dominant performance away to the Czech Republic, regaining top spot in group A2 of their UEFA Nations League fixture. With just a game to go, Fernando Santo's side are now primed to qualify for the finals. Manchester United star Diogo Dalot continues to go from strength to strength and was his side's standout player on the night. He broke the deadlock just after the half-hour mark and was also solid defensively. He also knocked the wind out of the Czech Republic's sails in the second half with his second goal of the night and should be a lock for an inform this week.

Scotland went some way to compensating for their World Cup play-off heartache by claiming a crucial Nations League victory over Ukraine at Hampden to move top of Group B. McGinn had a quiet first half but he did come to life in the second, setting the wheels in motion for the victory and gave his country the well deserved lead. Dykes is another option with two goals but with not even 15 minutes played I doubt it will be enough.

There have been a lot friendlies the last week, especially in Africa and one took place between Burkina Faso and DR Congo, with the better outcome for Burkina Faso. They took the applause with a narrow 1-0 victory thanks to Bertrand Traoré who played on the RM position. Not the best card with just 1* Weak Foot and these stats.

LA Galaxy recorded a second consecutive win and moved up to fifth place in the Western Conference after they took all three points in their 3-2 victory over the host San Jose on Saturday night in the California Clasico at Standford. Javier „Chicharito“ Hernandez played the leading role as Mexico's all-time leading goalscorer netted twice, inspired and motivated by a tifo from the opponent fans. The brace brings his season goal total to 17 and could also result in an inform this week.

A Kevin De Bruyne show helped Belgium beat Wales 2-1 in the UEFA Nation League on Thursday but with him recently being featured on TOTW1 we have to look at other players for a potential inform. One of these players is Batshuayi who scored one and assisted another for Belgium, could be enough for an inform this week.

While we usually have more than enough hat-tricks when domestic football is played and someone might miss out, we have less than five this week. Jevani Brown scored his third professional hat-trick the past weekend as Exeter City crushed Forest Green 4-0 at The Bolt New Lawn in a dominant display.

Ukraine were overtaken in top spot by Scotland in Nations League group B1 after suffering a 0-3 loss against Scotland on Wednesday but went back on winning ways with a comfortable and convincing 5-0 victory over Armenia. Shakhtar's winger Zubkov could pick up an inform this week after he scored one and assisted another two for his country.

The EFL was one of the very few leagues in action the past weekend and we might see more than just one player getting an inform from these games. One who could join the side on Wednesday is George Miller who scored twice and assisted another as Doncaster ended a run of three successive league defeats with a 4-1 triumpf over struggling Crawley.

Hungary produced a surprise victory over Germany in their Nations League Group A3 match on Friday evening. The result sees Hungary stay top of the group on ten points, while defeat for Germany – their first under manager Hansi Flick – sees them sit in third on six points. The only goal came from Szalai who scored with an outrageous backheel flick and could be in the squad due to the lack of hat-tricks from silvers.

That concludes this week's Team of the Week predictions! What do you make of these predictions? Is there anyone else who should have made the TOTW? Let us know below!